GOAL:
1.  Students will read 1,049 minutes or pages, appropriate to their reading level.
PROCEDURE:
1.  Teachers explain to their students that they will compete in their own Iditarod Trail Sled Dog Race. Only their race will be a reading race.
2.  Each student draws a musher ‘s name from entries on the Iditarod website: www.iditarod.com. Each day during the race, they’ll try to read faster (pages or minutes) than the number of miles covered by the musher they have drawn.
3.  Teachers will track each student’s progress on a large map of Alaska.  (Tracked by daily visits to the website during the race.)  The goal is for students to read faster than their musher is traveling down the trail.
4.  Students select their books before the ‘vet check.’  Teachers will decide if the student’s books are “healthy” (grade/reading level).
5.  As students read to each checkpoint, it’s their job to log in their time and have it checked by a race marshal (teacher).
MATERIALS:
1.  Large map of Alaska with Iditarod Trail & checkpoints clearly marked.
2.  Legend listing distances between checkpoints.
3.  Name pins/tags to mark students’ reading progress on the trail.
4.  Sleds or dogs (felt or construction paper) to mark progress of mushers.
5.  Iditarod Reading Log for each student.
6.  LOTS OF BOOKS!
OBJECTIVES:
1.  Encourage recreational reading.
2. Develop an interest in history and geography of Alaska.
3.  Encourage completion of a project.
Posted by Sherry Shahan at 12:45 PM No comments: 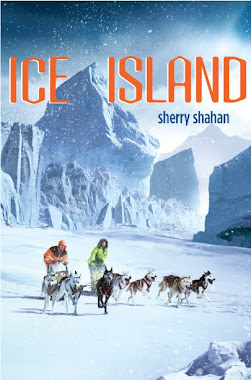 Sherry Shahan
Some people have a strange idea of what it means to be a writer. They think I’m locked away in a tiny room with only a computer to keep me company. Sure, I have calluses on my fingers from countless hours typing. But that doesn’t mean I don’t have a life away from my work. I’ve ridden on horseback into Africa’s Maasailand, hiked through a leech-infested rain forest in Australia, and shivered inside a dogsled for the first part of the famed 1,049 mile Iditarod Trail Sled Dog Race in Alaska. For adventure novel ICE ISLAND (Random House), I traveled to a remote island off the coast of Alaska. I was surprised to see polar bear hides hanging on drying racks and men repairing walrus skin boats. When not traveling around the world I like to dance. Sometimes I enter contests at dance conventions. Even though I’ve never won one -- at least not yet -- it’s fun to wear clothes that sparkle and glue on false eyelashes.